Thus Ferdinand of Antequera (in fact a member of the Castilian House of Trastamara) came to power in a manner similar to a military coup in conflict with the prevailing order of succession.

When James Count of Urgel died in captivity in 1433, the legitimate line passed to the Duke of Gandia who died without heir in 1454. At this date the operative document became the Will of James I the Conqueror, as this was the only law of succession in existence, which clearly said that his legitimised male descendants by Teresa Gil de Vidaure were to take precedence in the succession over those in a female line born of Yolanda of Hungary. The lawful succession to the thrones of the Lands of the Crown of Aragon thus passed in 1454 to the House of Ayerbe.

Teresa Gil de Vidaure was the third wife of James the Conqueror who in his Will of 21st August 1261 recognised their two sons James and Peter, born before the marriage but subsequently legitimised, and allowed the succession to pass through them should the senior lines fail, which they did.

The honoured custom since time immemorial was and remains that, provided that there is no specific debellatio (that is, renunciation of sovereign rights), the jus maiestatis inheres forever in the person of the lawful head of the family in accordance with the will of the particular family under consideration. This principle is now incorporated in international law (see e.g. http://www.dynastic-law.com/ ). Thus, when the Duke of Gandia died in 1454 – the line leading from James I of Xerica (c1255-1280) the elder legitimised son of the Conqueror, being already extinct since 1409 – the Headship of the House of Aragon and de jure kingship of the Lands of the Crown of Aragon passed to a descendant of James of Ayerbe, the elder son of Peter of Ayerbe (the Conqueror’s younger legitimated son). Sancho’s grandson, Alfonso, became Count of Simari in 1519, and Alfonso’s grandson, Alfonso III, became Marquis of Grotteria. In turn Caspar VI, Alfonso III’s great-great-great grandson became the first Prince of Cassano. These great nobles were de jure kings of the Lands of the Crowns of Aragon until their line became extinct with the death before 1851 of Joseph the last Prince of Cassano.

After the extinction of the senior branch the succession then passed to the cadet branch of the House of Ayerbe, the line from Peter, the younger son of King James the Conqueror in his third marriage.

In the 19th Century a wave of mediaeval revivalism swept Europe from which Sicily was not exempt. The then Duke of Carcaci, a prominent intellectual, notably researched the historical order of chivalry in his family’s gift, a study which even merited mention in his funeral eulogy.

The House of Ayerbe and the Pact of 1853

Peter first Baron of Ayerbe had a son Michael who in turn sired a boy, Giovanni the Elder born in 1347 and who in 1398 became Vicar General of the Kingdom of Sicily. Giovanni married Sibilla Spadafora and from that union descends unbroken the line of the House of Paternò.

Individual members of the House of Paternò regularly held the highest offices in the land such as Archbishop of Palermo, Viceroy, Ambassador to the Pope and Lord in Waiting to successive Kings of the Two Sicilies and the said Kings gave full recognition to the Family’s particular status.

Over the centuries the descent had thrown off numerous branches, many of which have intermarried. Thus, when the last Prince of Cassano died, it was not clear who precisely held the dynastic right to the jus maiestatis of the Lands of the Crown of Aragon and it became urgently necessary that the question be answered. 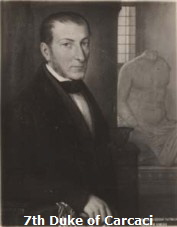 A family conclave, on the initiative of the Duke of Carcaci Don Francesco Paternò Castello e Sammartino, was called on 14th June 1853, and held in Palermo in the palace of the Marchese di Spedalotto, head of one of the more senior branches of the family. After a review of the relevant evidence and a wide-ranging discussion, it was the finding of the conclave that the royal rights, which had been the subject of the debate, should be confirmed as belonging to Don Mario, son of the Duke of Carcaci’s younger brother Don Giovanni and his wife Donna Eleonora Guttadauro of Emmanuel Riburdone, the heiress of the House of Guttadauro. This conclusion which had received the assent of King Ferdinand II of the Two Sicilies was reached on the recognition that Don Mario alone had the royal blood of Aragon in his veins from two sources, through the separate descents of both his mother and his father from King James the Conqueror.

A family pact was then signed and registered on 16 June 1853 in the Chamber of Seals and Royal Registers of the Kingdom of the Two Sicilies. It was decreed that during the minority of Don Mario, his father Don Giovanni should be Regent.

The sealing of the family pact was but one of a series of events following the death of the last Prince of Cassano which determined and confirmed the dynastic rights of the House of Paternò Castello Guttadauro. The final endorsement came on 2nd February 1860 when the Royal Commission for Titles of Nobility recommended to the new king Francis II that a petition by “Ecc’mo Sig. Don Mario Paternò Castello Guttadauro dei Duchi di Carcaci be granted. The petition was that the Prince should receive all confirmation of the Sovereign’s assent for those “chivalrous distinctions” which he wished to bestow. On 11th February 1860 the king approved the recommendation of the Royal Commission and directed the Secretary of State for Sicilian Affairs to give effect to his approval.

The designated Regent, Don Giovanni, worked vigorously to assert the dynastic rights of the family. In doing so he was crowning the work of his elder brother the great Duke of Carcaci who had died in 1854, having spent his life establishing his family’s Royal dynastic rights and regulating the succession.

The principal vehicle used by the Regent was the Military Order of the Collar of Saint Agatha of Paternò. Taking full advantage of the recognition granted by successive kings of the Two Sicilies, Don Giovanni proceeded to recruit to the Order the flower of the nobility of Sicily. In 1859 the Royal Order of San Salvador of Aragon, which had been founded in 1118 by Alfonso I, had been revived and in 1861 the Order of the Royal Balearic Crown was established.

The year 1861 was a fateful one. Don Giovanni died and Don Mario I, by then 23 years old, assumed full responsibility for the rights of his House. The Bourbon monarchy of the Two Sicilies was overthrown and the kingdom was incorporated into that of the newly created Italy under the sovereignty of Victor Emmanuel II of Sardinia of the House of Savoy. Thereafter Don  Mario maintained a policy of neutrality favouring neither the intruding House of Savoy nor the deposed Bourbons. Two of his three sons predeceased Don Mario and his third son Don Enrico succeeded his father in 1906.

Don Enrico died in 1908 without issue and by the Will of Don Mario the succession passed to Donna Eleonora Angela Maria, sister of Don Enrico, and to the issue of her marriage to Don Roberto Paternò Castello, brother of the tenth Duke of Carcaci. In 1913 Donna Eleonora bore a son, Don Francesco Mario II for whom his father acted as Regent until he attained his majority in 1934. Don Francesco Mario II was a colourful, indeed flamboyant, character who vigorously promoted the dynastic rights of his family – not always, be it said, diplomatically. In November 1965, due to painful illness and thus being unable to exercise his full powers, he decided to associate his son the Infante Don Roberto (born in 1937) with himself in the government of the Royal House. In October 1962 in the ancestral church of Santa Maria di Gesù in Catania. Don Roberto had married Noble Maria of the Counts Fattori. On 28th November 1965 Don Francesco Mario issued a Decree conferring on Don Roberto the title of Prince of Gerona and formally sharing with him his sovereign and magisterial powers.

The power-sharing between father and son continued until the death of Don Francesco Mario II on 16th February 1968 at which point the Prince of Gerona was formally proclaimed Head of Name and Arms of the Royal House of Aragon in the style of Roberto II in the convent of St Augustine in Catania. Magnates and dignitaries of the Royal House were present on the historic occasion. Don Roberto II took the titles of pretence of Duke of Perpignan and Prince of Emmanuel, whilst his elder son, Don Francesco was created Duke of Gerona, the title usually borne by the heir to the Crown. Subsequently Don Roberto divorced Donna Maria dei conti Fattori (the marriage was not annuled), the mother of Donna Aurora Duchess of Palma and Don Francesco Duke of Gerona and dynastic heir, in order to marry in a civil ceremony Bianca Monteforte whom he styled Marchesa di Montpelier and by whom he had a further son, Don Torbio created Duke of Valencia.