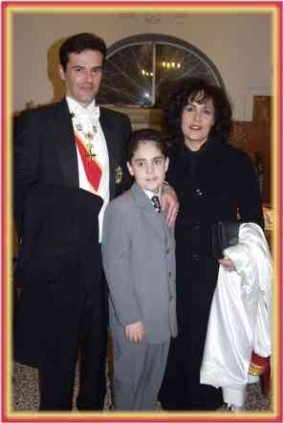 In 1996 for personal reasons by means of a formal notarial act sworn in the commune office of Mascalucia (Catania) Don Roberto II abdicated categorically and irrevocably all his rights and responsibilities as Head of the Royal House. Thus Don Francesco, as the elder son born of an equal and
dynastic matrimony
consecrated by the Church became Duke of Perpignan and assumed all the rights and responsibilities as Head of the House of Aragon. The succession is now happily assured by Don Francesco’s own sons, Don Roberto,
Duke of Gerona (born 1992) and Don Domenico, Duke of Ayerbe (born 2001) by his wife Noble Donna Giuseppina Campisi .